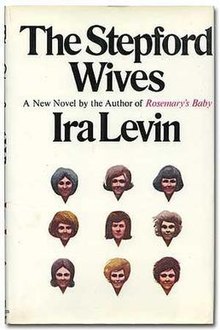 I bought this book as a part of my Women’s Day, so when i finally came around to reading it I was pleasantly surprised. the basic plot line is about this modern, liberal couple who move into this quaint town where all the women only believe in housework and serving their husbands which is a very orthodox mindset even for the year this book is set in. The town has a Men’s Association who make all the various decisions regarding the town and its working.

The protagonist, Joanna, is a very strong independent woman who is a photographer and a mom to two kids. Her husband is also a supporter of women’s rights and he too finds the women in stepford to be somewhat odd so he and Joanna decide to bring a change in the town. He decided to join the association despite Joanna’s protests while she tries to talk to the women of the town and try to gain their support. She fails until she finds two women who had also moved there recently. So they start to meet regularly and try to figure out the mystery until one of them also changes somehow and starts behaving like a 1950s housewife.

Joanna and Bobby race against time to find out the secret about whats making the women behave so oddly. But the book really picks up after like 75% where Joanna really starts noticing little things and how they add up its really genius. The last chapter was phenomenal! My jaw dropped when the suspense was kind of revealed not directly but enough for the readers to add up the events and leave a little room for imagination.

What I really liked was the slow build suspense of the book. It was very well-written and really gave us the feels of the atmosphere of the book. The book is a satirical thriller and gives a really good idea about the Women’s Liberation Movement and how the men are “opposed” to the idea of women being anything more than a housewife and doing something for themselves. Overall the book was obviously very well-written and i would definitely recommend you give this one a read if you’re looking for a suspense/thriller with a dash of feminist literature.

7 thoughts on “The Stepford Wives”