So some days I’m just surfing through Instagram and come across a cute guy and I’m like op I should dm him because it’s not like I’m getting out of my house to actually meet any ya know? And then I read Jay’s books and I’m like yeah cancel plan, there’s no way I’m settling for anyone less than a Josh or Lucas or C

Does Jay ever let down? Kick, Push was just brutally beautiful and so full of emotions, a book that’s just gonna make you feel so much of everything. I was sure nothing can compare to her More Than This series and Kick,Push definitely put up a fight, I won’t say its just as good but almost just as good and that’s a lot to say because More Than This is godly.

Kick, Push starts with Josh’s story when him and his girlfriend are pregnant at 16 and he promises to be there a 100%. Turns he did end up being 100% of the parent because his girlfriend left in just a while after Tommy’s birth. Life was hard for Josh after, he had no one and nothing but he was determined to sacrifice everything for Tommy to have a good life- and he did.

Three years later, with help from an old woman who becomes his family , his best friend Hunter and his uncle and aunt, Josh is making it bu he’s left his dreams and his life.

That is until, the woman she’s living with’s grand daughter shows up- the one who doesn’t speak much , doesn’t like to be touched and is always in her room- unaware of just how much her life is going to change.

Becca has been through hell and back in her life, and she hasn’t lived it until Tommy and Josh who show her what life is and shower her with love- and she does it back too. But I’m not going to say much about Becca, she’s a mystery you’ll have to read.

Tommy is just the most adorable kid, and I love the relationship he and Josh have, it’s adorable. Reading about a single dad just being this cute with his son still has been shivering.

So there’s drama in this book and there’s love and angst, sorrow and hope and just a whole roller coaster of emotions.

However as much as I loved Becca and Josh, I never connected much with either of them and I could never fee like being a part of the story or of living it through them, sometimes it also got a bit repetitive which is why I’m giving it a 4 star instead of 5. 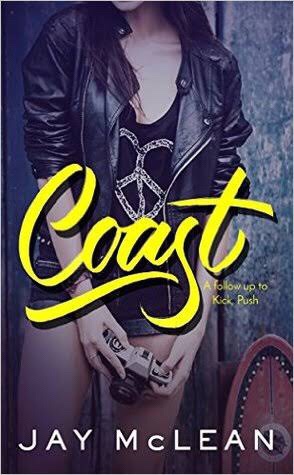 Coast was 10x times better than kick,push and made me actually fall in love with the series. Both Josh and Becca have grown up and they’ve reached a good point in their lives. Josh is a professional skateboarder and Becca is living with her father , she is independent and confident in herself and loves herself. Although there are a lot of complications, their relationship is just effortless and their family is adorable.

Song for the book : Stay Here Tonight by Enrique Iglesias.