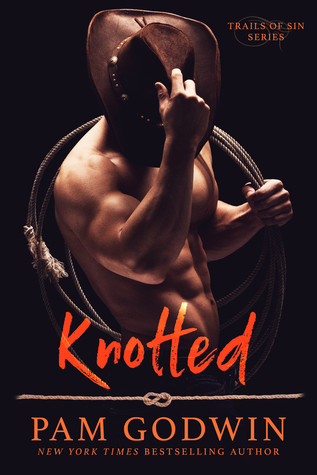 I knew after Beneath The Burn that Pam’s books are out of the norm with her unfiltered instances of abuse, filled with painful emotions and mind fucking (but also in a good way). Yet, that did not stop me from being absolutely heartbroken in the start and crying thrice in just half an hour. Knotted had, I would say, the most painful starting than any other book I’ve read and it had me hooked from page 1.

Jack and Connor are childhood sweetheart, having grown up together along with their brothers- Jarrett and Lorne, and the four of them are thick as thieves. Their connection is undeniable and their love is unforgettable and although forbidden by their fathers, they carry on their relationship with their brothers covering for them. So was their plan one night – a night which should have been the most important night for Jack and Connor but turns out to be the night that changed everything for the four of them. In a series of events, the brothers and Jack had to watch helplessly as Connor was brutally assaulted in front of their eyes. That was a dark twist that I was not expecting and I am still a little shook by the fact that Pam actually wrote that- it was painful and heartbreaking to read but it’s the boldness of writing a rape scene like this is also one of the reasons Pam’s books are so different. So you’d think that their night of losing their virginity to each other being turned into Connor being raped and Jack having to witness that was enough- but no, the story just gets more and more painful after Connor’s brother in imprisoned for having killed an innocent while trying to chase the men who assaulted Connor and the last straw being Connor’s father taking her away from the only boy and the only place she’s ever loved. All of this for Connor to come back two years later and having her heart broken all over again.

The only thing that joins the four again is the blood oath- the revenge to kill the other surviving rapist once he is out of jail – mixed with the truths and lies and betrayals, things you will never see coming- this book is outright addictive.

Connor is such a strong female lead and reminds me of a phoenix rising from its ashes because nothing could throw her off her game– she overcame so much of what life threw at her despite being so young- her bravery, determination and strength is something to look up to.

Forcing to be watched his love of life- a girl he had promised himself he would protect and love, broke Jake and so when Connor’s father took her away, he thought it was the best to let her go and the only way he knew how to do that was to break her heart. But after getting his second chance with the love of his life, Jake gets his head out of his ass (even though I understand why he did what he did) and fights for and with Connor. Did I mention he’s also a sexy and protective and alpha cowboy?

Jake and Connor’s bond is inseperatable and their passion runs so deep, you can feel it through the pages of the book. I also adored the relationship they have with their siblings- it was heartwarming. I absolutely adored the first half of the book – the second half did get a bit boring but I think it’s mainly because I was getting into a book slump and it just didn’t live up to be as amazing as the first- amazing nevertheless.

I also did find the factor of Jake himself helping Connor get over her trauma a little bit unrealistic but again, I’m no expert on psychology and trauma. What do you think of that aspect if you have read this book?

This book is dark and full of romance and suspense, I highly recommend it if you’re in for a dark sexy romance.