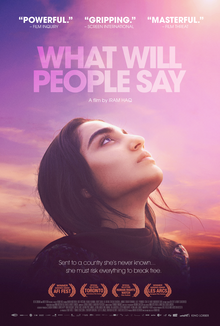 What Will People Say perfectly portrays the double life lead by a lot of brown girls- Nisha, a Pakistani immigrant in Norway, speaks proper Urdu in her home and is the perfect diligent daughter dreaming of becoming a doctor- but while out with her friends, she is also your typical teenager, sneaking out of the house to go to parties and out with her boyfriend. It is only when she is caught with her boyfriend, that her father and family kidnap her and ship her off to Pakistan where her aunt and uncle can keep a close eye on her, and added to it are the shameful comments, burning of her passport, threat of marriage and even murder- forcing her to negotiate between the life she has always known and the culture she has no idea about.

I actually have no words here, the movie is intense and compelling, keeping you on your toes all the time and making your heart burst with sorrow. Maria Mozhdah’s acting is so captivating and fierce, she makes you feel every psychological terror that she goes through and has you rooting for her freedom throughout. I love the fact that despite being headstrong to not fall into the cultural traps, Nisha isn’t perfect – she’s still a sixteen year old teenager making a few naïve decisions.

Iram Haq’s direction is plainly mesmerizing- I read somewhere that the film is based on some what of a real life experience she herself had and you can so clearly see that portrayal in the film- just even in the basis of having to constantly differentiate between the two cultures. We also get a peek into how the culture and patriarchy are preached not only by the men- but also the women of the family, almost forcing Nisha into a loveless marriage where she would have to be the perfect housewife.

There were a couple of things that didn’t add up , like how did Nisha go back to Norway when her uncle had made her burn her passport- but nothing that really affects the storyline. Overall, this movie was brilliant and a must watch.