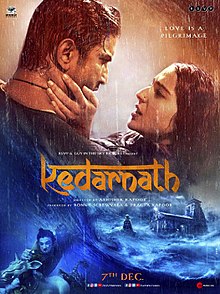 So one of the main reasons why I was so excited to watch Kedarnath was Sara Ali Khan – and mark me , I donot take well to new actors, especially when they are celebrity kids but man, Sara killed it in this movie.

Kedarnath is based and set in Kedarnath (Uttarakhand) in 2013, focusing on the event when the area had suffered through one of the most disastrous cases of flooding and landslides.

(Wikipedia) Featuring Sushant Singh Rajput and newcomer Sara Ali Khan in lead roles, it tells an inter-faith love story between a wealthy Hindu girl whose family owns a lodge and shops near the historic Kedarnath Temple in the Uttarakhand mountains and a humble Muslim boy who is a ‘pithoo’ (porter) working in the same vicinity. As their relationship grows closer, the pair face many obstacles, including familial disapproval and contrasting backgrounds; when the sudden rains of the 2013 Uttarakhand floods devastate the region, the couple are forced to survive against the elements and face the ultimate test of their love.

Both Sushant Singh Rajput and Sara Ali Khan’s performances were genuinely fantastic, and you would not believe that its just Sara’s first movie by her acting- you could really feel what her character Mukku was feeling merely through her eyes. Her dressing (especially all the earrings) was gorgeous , I mean I know whats going to inspire my wardrobe now.

The story was sweet and well made- while the ending had me bawling my eyes out, the first half of the movie was just so beautiful and romantic- and set in the breathtaking and picturesque beauty of Kedarnath, who wouldn’t be dreaming of it? And the music just adds ten more layers of depth to the movie, the music is really minimalist with just three songs but they are just beautiful and make me want to cry.

There were, though, one too many parts that left me finding for logic and just wondering how that’s even possible. The movie could’ve been better without a doubt, it’s not one which will stay it with you all your life but overall, the film was just a beautiful watch.