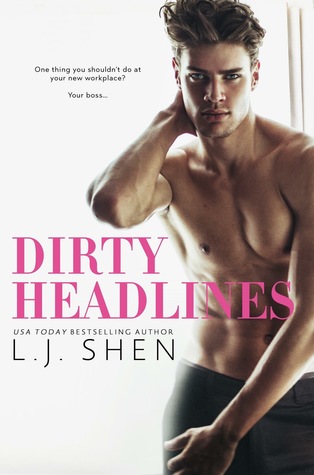 If there’s one thing I can vouch for, it’s that you can never go wrong with a L J Shen book- NEVER. I literally went into this one, half blind about the summary, just knowing that I’m going to love it, and boy did I sit on a roller coaster of emotions.

The first time Celian met Jude, it was in a bar and a mind blowing one night stand after a bad day for both of them. Even though they had a ‘great’ time, they didn’t expect to see each other again- until Celian turned out to be Jude’s new boss and basically the heir ( a rightfully earned position though) to an almost kingdom. But they’re both emotionally lonely and tired, and none of them feels like they can fall in love at all- and while their relationship becomes mostly about sex, throughout the book, we just see them acting like a couple or on the path to one if that makes sense. they didn’t just go from friends with benefits to a couple, they were always something more, whether they chose to believe it or not, and that is just beautiful.

First of all, Celian is one of the sexiest names I’ve heard , and one of the sexiest men I’ve read about. He’s like a greek god, just thinking about him makes my freaking ovaries melt! Your uber alpha-hole (some of his tactics, I did find a bit cliché but his sexiness makes up for it), wronged by his family who never felt like he had anyone in the world- until he finds Jude. It’s goosebumps giving to read about such a cold man just not understanding and trying not to be jealous or in love, and miserably failing, and hating it. I died for his dirty talks and all his alpha male possessive reactions- if there’s one person who can write goosebumps giving alpha males, it’s L J Shen. And Jude did give him one hell of a hard time by playing with his emotions and jealousy and it was hilarious.

The book itself was hella hilarious, probably one of Shen’s lighter books filled with funny sarcastic comments and comebacks- but equally angst and sexy chemistry filled, with sex scenes that are going to combust your ovaries. Celian and Jude’s chemistry is sizzling and burning in the air, you can feel it, trust me. I never thought journalism or the media industry romance could be this sexy, but man it was hella.

Jude is such a badass heroine with her sarcasm and sass, and she’s just purely brilliant at her job as a journalist, and a broken but easily lovable person. I adored how strong and independent she was, but also didn’t hesitate to take Celian back every time he screwed up- and understood his asshole behavior. Like Celian, she’s passionate and loyal, a perfect match, and the only person who can ever challenge Celian so strongly.

If you’re looking for a  sizzling enemies to lover book, filled with lust and a whole lot of sexiness, stop right here.

Songs for the book:

-Down by Jason Walker

-Anybody Seen My Baby by The Rolling Stones